Did you know that the First Zodiac was Lunar not Solar?

If we were to look up at the night sky every night, what would we notice move the most? The Moon moves daily and is easiest to see it move across the sky from day to day and night to night. Out of all of the planets we see with the naked eye, the Moon is melodic.

The daily movement of the Moon has a special place in Vedic Astrology. The Moon moves to a different place in the sky each day. Each region of sky is called a lunar mansion. The Moon passes through one Lunar Mansion each day. In Vedic Astrology, the Lunar Mansion sets the flavor of consciousness for the day. There are aligned actions for each type of day which will bring less suffering, if you work with the energies instead of against them. Lunar Mansion = Moon Mansion.

Moon Calendars align you with this natural daily rhythm. Conscious Calendars gives you a condensed color-coded Moon calendar at your fingertips.

The First Clock in the world was based on the Moon.

Our ancient history of being human on the planet is deeply connected with the Moon. The Moon was our original clock. The ancient Indian Calendar is based on the movement of the moon and how it activates different portions of the sky each day and thus flavors the energy of the day. This is the basis for Conscious Calendars. Below is a story of the Moon and gives you a map of the daily moon energy according to Vedic Astrology.

The Moon is more important than your “Sun sign” in your Vedic Astrology birth chart. The moon in your Vedic Birth Chart determines how you perceive the world and the evolutionary path of your consciousness.

The Moon in your Vedic Birth Chart describes the talents that you are born with or the potential of what you can achieve in this lifetime.

The Sun in someone’s chart describes the outward appearance and how someone thinks they appear to others while the Moon describes the inner nature of the soul and true qualities of their consciousness. It is for this reason that people often say that I have described parts of themselves they have never shared with anyone before. You are able to be witnessed, supported and help re-frame old stories which may not serve you anymore when you get a vedic astrology session with Kathleen.

In the Vedic stories, the Moon is a central theme because the Moon in Vedic astrology is connected with consciousness. ‘Manas’ is one of the words for consciousness in Sanskrit. The moon determines the “consciousness of the day” on a global scale.

The Moon is an important marker of time, rising at a different time and place each day. In Vedic stories and Vedic astrology, the Moon and all the planets are considered to be ‘masculine’ traveling in a feminine sky and heavens.

In Indian or Vedic Astrology, the 27 regions of sky are called lunar mansions; places the moon visits each month on its path across the sky. Below is the story of how the moon has Mansions and how this relates to the energy that shines from the heavens through you according to your personal Vedic Astrology chart.

Here’s an explanation of the ancient moon calendar alive today.

The 27 mansions that the Moon visits each month are the 27 daughters of the Celestial Architect. They are Goddesses who live in each region of sky and encompass all the stars you can see within it. Each Goddess and each segment of the heavens has a cosmic force and ‘gift’ that is within your reach. Sometimes this gift and talent is a new one you are developing and sometimes you are an expert and have deeply engrained habits and patterns that make certain activities easier for you. In each Vedic birth chart, you are born with the Moon, Sun and the planets in the lunar mansions. This is just one of the ways that Vedic Astrology has more detailed description of the qualities of your consciousness, skills and abilities.

The 27 goddesses are married to the Moon also called Chandra or Soma. He visits them each, one day at a time.

The Story of Why the Moon Waxes and Wanes

The Moon visited each of his wives each day until the sisters noticed a change – one of the sisters, Rohini, captures the Moon’s attention and he lingers longer with her (for she has the fertility and power of Aldebaran, the Red Star that makes her the Red Goddess), the other sisters turn to their father for fairness. They beg their father three times to get the Moon to come to all of them, the third time they ask their father to punish the Moon. Their father, the Cosmic Helper and World Maker said “I will make the Moon waste away and die, even though he is a God”. With that curse, the Moon began to get thinner and thinner and waste away in front of their eyes.

Now at the realization they could lose him completely, the wives felt deep compassion for him and realized they wanted him to live, calling out to their father, “Save him please!”

Their father told them that the curses of Gods cannot be undone. He could only modify it. He could restore the Moon again, but he would cycle through the sickness and become well again, repeatedly. That was the best he could do on his own curse.

And so it was, the Moon could live, visiting each wife, each night, no longer staying only with Rohini (even though he favors her still). This is how the Moon waxes and wanes throughout its cycle, still visiting one region a day arcing across the sky every month.

The moon is considered exalted in the place in the sky called Rohini, where consciousness and creativity and fertility flourishes on these days. 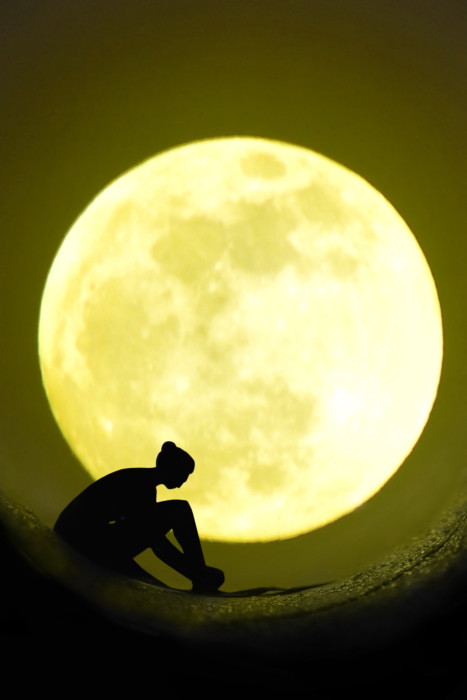 The Moon Pattern is our Ancient Clock

In astronomy, the Moon moves along a predictable path in our sky, the same path that the other planets and the Sun appear to travel. Our ancient connection with the stars and time is connected most with the Moon. It is because the Moon appears in a different part of the sky each night, that our ancestors were able to track time, our connections with the stars and eventually seasons and years. “The Moon is the basis of the heavenly clock.” (Dennis Harness author of Nakshatras)

The ancient Indian Calendar is based on the movement of the moon and how it activates different portions of the sky each day, namely how it activates the fixed stars that are beyond the moon and how the energy that comes from that region of the cosmos affects life on planet Earth. Each region of sky is called a moon mansion or a lunar mansion. The sanskrit word for a portion of the each constellation is Nakshatra. The moon passes “through” Nakshatras as it orbits Earth. So, even though Nakshatra has to do with the stars, the moon is what activates that region of the sky connected to the dance of solar-lunar movement that our biodynamic field and bodies respond to through the seasons, and the lunar cycles. Nakshatras

The word Nakshatra is a Sanskrit term. The root “Naksh” means to approach, while “Tra” means a tool, instrumentality or a means. So, a Nakshatra is a means to approaching our innate connection with cosmic powers and extending our human time (breaths of our life) with a greater cycle of time (the life time of the stars and planets).

The term Nakshatra is mentioned in the Rg Veda, the most ancient of the four Vedas (dated to at least 4,000 B.C.E by Eastern and Western archeologists). The Nakshatras are listed in the Arthava and Yajur Vedas, ancient texts that describe how we can live in harmony in every aspect of life.

Since the Moon takes 27 days to complete a circuit of the zodiac (using the Vedic tradition of 13 degrees for the mean daily motion of the Moon). This means that every night we would see the Moon in a different place in the sky, or a different Moon Mansion, and it would return to the same place in the zodiac 27 days later. There are 27 or 28 Lunar mansions in Vedic astrology because the full cycle is actually 27.3 days.

The Middle East had a system which used 28 lunar mansions, as did China. The Celts also had a myth of a Moon king and 27 star wives. Observers around the world from different cultures all used 27 and 28 lunar mansions to mark time and understand our place in the Universe. This ancient form of understanding the cosmos is echoed in Greek and Egyptian mythology.

The Vedic system is one of the oldest constantly used methods for making calendars and understanding natural rhythms. From this comes an understanding of lunar and planetary combinations that repeat themselves, and give us windows into Earthly and cosmic rhythms. Some might call the ability to see complex combinations ahead of time the ability to predict outcomes, some call it mere astronomy. The cosmic principles that underlie the planets and the moon and how they affect our consciousness and lives is the source of Vedic astrology. Only in recent history have complex topics of quantum physics, geomagnetic fields of planets and dark matter all combined to barely begin explaining what is called the energy of the Universe.

Conscious Calendars connected with the Rhythms of the Moon

The Conscious Calendars use a combination of the rhythm of the Moon, the planets, the sun, and the daily sunrise to give you a pulse of the day. It is from this special combination, more than a panchangam, that you are given insights to what each day’s rhythm might be like.

The most important thing to remember from all of this, is that our daily rhythm is connected with the same sky and the same moon as our ancestors, and that the ancient method of looking to the sky to understand our day, our month and our year is born in each of us, just by being human.

The 27 Mansions of the Moon are listed in modern day as:

Abhijhit, a magic window, which is only used with CHOOSING EVENTS. This is reflected in the Conscious Calendar system as a Green Day when the right elements align. This is a very special Moon Mansion, only used on special kinds of occasions and with electional astrology. Conscious Calendars is a color-coded Vedic astrology calendar which helps you choose what activities are aligned with the day to reduce friction and resistance and increase efficiency, ease and joy.
It is a tool to help you evolve your consciousness on a daily basis.

This is a foundational Vedic Astrology article, which is meant to be a glimpse into ONE of the elements which makes up the Conscious Calendar system.

See how this gets complex pretty fast? To determine the energy of the day, Conscious Calendars examines the light of the moon, the day of the week, the Lunar Mansion, and whether the Moon is receiving rays of light from Jupiter, Venus or Mercury and/or whether the Moon is receiving rays of disturbance from Mars, Saturn or the eclipse patterns is all integrated into the simple color coded system of Conscious Calendars. wow!

Vedic astrology is a complex topic. The lunar mansions are linked with our most ancient form of keeping time. The moon moves across the sky with a regular beat. It is our first clock as human beings, along with the rising and setting of the sun.

Vedic Astrology uses a both a moon and sun calendar simultaneously, with the ryhthm of the Moon setting the flavor of the day globally.

Welcome to the solar-luni or Sun-moon calendar that has been used for over 7,000 years. Simplified, with Conscious Calendars.

Capture The Golden Zones of July, August and September 2021

END_OF_DOCUMENT_TOKEN_TO_BE_REPLACED

Kitchari for Self Healing